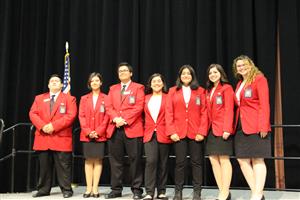 San Luis High School students were elected to five of the six officer positions for SkillsUSA Region 1, which consists of schools in the southwest portion of Arizona.

The SkillsUSA Region 1 Leadership Conference was held Friday, Sept. 6, 2019 at the Yuma Civic and Convention Center. All Yuma Union High School District SkillsUSA members were invited to attend. Of the hundreds of students in attendance, 16 were running for officer positions.

“I am extremely proud of our SkillsUSA Arizona State and National officers as they coach and provided new leadership opportunities to our SLHS students. Due to their commitment, we now have five SkillsUSA Arizona Region 1 officers,” said Nereida Lansman, who is the SLHS Career & Technical Education Instructional Leader. “In addition, the involvement from the SkillsUSA SLHS advisors to the organization is notable as we continue to grow and represent the organization.”