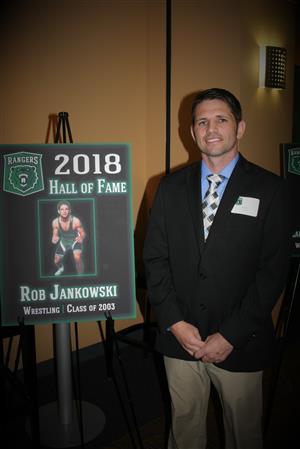 “This award was as much for me as it was for everyone who has helped me along the way,” Jankowski said. “My parents got me involved at a young age in gymnastics and later with high school sports such as football, baseball and wrestling. My brothers were vital to my success for several reasons: one, we have been wrestling around since we were toddlers; two, I always had a workout partner in practice and after practice to do extra conditioning or lifting; and three, they gave me the motivation to achieve something great. My teammates also provided me with motivation. They motivated me because I always wanted to be the hardest working person on the team, so when I heard that someone was doing something like conditioning in the morning or weight lifting in the nighttime I would join them and do a little extra. Lastly my coaches helped me out tremendously.”

The inaugural UWP Hall of Fame class was inducted in 1980 and classes have been added every 2-5 years since 1995.