NFL Hall of Famer and Super Bowl champion Curley Culp has been back to his old stomping grounds many times before. But none of those went quite like this.

Culp, who graduated from Yuma High School in the Class of 1964, was greeted with fanfare from the Yuma High student body, band, school and district administrators, former teammates and coaches, Criminals of the past, and even Yuma Mayor Doug Nichols. He was recognized for his lifetime of success in grand fashion. 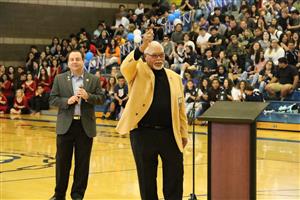 “Seeing the pride Mr. Culp has for Yuma and Yuma High School, the connection and bond between former Criminals and the joy that has brought to so many people, and the genuine interest Mr. Culp showed in our students was incredible,” Yuma Union High School District Superintendent Gina Thompson said. “It was the kind of special day that you wish would never end.”

His return was made possible by 1st Bank Yuma, which has partnered with YUHSD to deliver the EverFi financial literacy curriculum to more than 12,000 students in five years.

Culp, 72, was on hand to talk to students about the importance of knowing how to manage their finances, and was later honored at the school’s spring pep assembly when Mayor Nichols presented him with the mayor’s coin and key to the city as part of a larger ceremony that included clips from Culp’s Hall of Fame induction speech, playing career with the Kansas City Chiefs and Houston Oilers, and a contingent of former Yuma High athletes sitting along the baseline of the Palace Gym.

“It is the highest honor I can give someone,” Nichols said. “It means that no matter where you are or where you go, Yuma is always home. You are always welcome in Yuma.”

Culp attended Arizona State University following a stellar athletic career at Yuma High, which included two state heavyweight wrestling titles. He won a national title in wrestling with the Sun Devils before being selected in the second round of the 1968 NFL Draft. A year later, he won Super Bowl III with the Chiefs. In his 14 years as a professional, Culp made six Pro Bowls, five All-Pro teams, and won the 1975 Defensive Player of the Year. He is often credited with helping modernize the 3-4 defensive scheme. He was inducted into the Pro Football Hall of Fame in 2013 and was named Arizona’s “Athlete of the Century” by Sports Illustrated in 1999.

“Yuma is my home,” Culp said. “My foundation was here. This is where my journey began. So, I consider this to be a type of homecoming.” 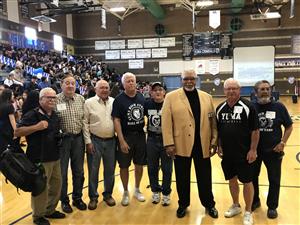