Former Cibola High School student Jocelyn Rodriguez will be recognized on Saturday, Dec 8, 2018 during the 119th annual Army-Navy football game March-On that occurs during the pregame festivities from Lincoln Financial Field in Philadelphia.

This event is held every year in recognition of the Cadets and Midshipmen from each academy.  Midshipmen Lieutenant Rodriguez, who graduated in Cibola’s Class of 2015, is the Company Commander of 1st Company and will lead the procession for the Naval Academy. Each Company Commander will be announced along with their hometown.

Midshipman Lieutenant Rodriguez will enter medical school after graduation from the Naval Academy in May 2019. She will be the first student from Yuma since 2006 to graduate from a military academy and attend medical school.

The Army-Navy game has been called "America's Game" as it involves some of our nation’s finest amateur athletes and service members. Annually, this is the last game of college football regular season on the second Saturday in December.  The March-On event will be televised on CBS Sports Network at 10 a.m. MST.

CBS Sports Network can be found on channel 158 on DISH Network, channel 221 on DirecTV, and channel 315 on Spectrum Cable. 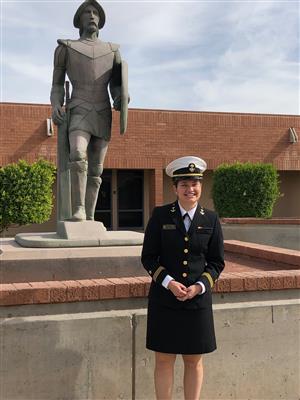