From its memorial wall to its thriving Marine Corps JROTC program, Kofa High School has long had firm ties to the U.S. Military. With the inception of the Veterans Heritage Project on campus, those ties are growing even stronger.

Seven Kofa students, under the direction of teachers Tammy Foley and Stephanie Carrasco, are part of the campus club which, in its second year, connects students with military veterans. They conduct interviews with local veterans and write profile stories about them for publication in an annual hardcover book as well as permanent archiving in the Library of Congress.

“This has been a very rewarding project,” Foley said. “It feeds my soul. It is important to acknowledge what veterans have done for us and to have students learn and understand that, and show veterans the deference due them. It truly did impact my boys and I as well as one of my colleagues who helps us, Patrick Hardin, when we realized that not every veteran at the cemetery had a cross to mark their grave or enough wreaths.”

Honoring veterans is something that has resonated with the students so much so that it has impacted their daily lives. On a visit to a memorial site, the students cleaned off dead grass and debris from veterans’ graves and identified sites not marked with a cross to designate military services. While the club has fundraised for publishing the stories, something that costs upwards of $250 per article, that experience led them to also begin fundraising efforts to purchase wreaths for veteran grave sites next year. They also wrote more than 1,200 Christmas cards to veterans during the holiday season. 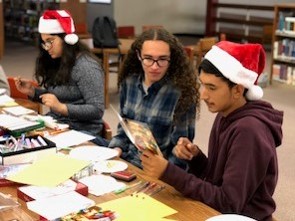 Kofa students Diego Juarez and Gavin Werley discussed the scope of their club’s work with the Yuma Union High School District Governing Board at its January meeting.

“It was such a moving experience to see the students at our Governing Board meeting,” YUHSD Superintendent Gina Thompson said. “I am always impressed with our student presentations.  The personal actions that are beyond the actual articles and creation of the book truly impacted everyone. To see the commitment to veterans and the genuine honor the students spoke with regarding the veterans humbled me so much.”

Foley, Juarez and Werley, like many of the club members, have direct familial connections to the military. Werley has relatives who are service members, while Juarez’s brother, one of Foley’s former students, is currently serving in Iraq.

For Foley, working on the project has been rewarding for an array of reasons. But, perhaps, the most important among those is an opportunity to honor her Uncle John, who fought in the Battle of the Bulge in WWII.

“He was wounded and taken prisoner by the Germans,” Foley said. “He lost his leg and we were told to never ask anything about it. He was having a conversation with my dad one day at our dining room table my senior year of high school. It was the first year that they had reinstated the registration for the draft and he asked what the kids my age thought. I told him some of them were being resistant. He started talking to me about fighting and being a prisoner, about the doctor who saved his life, the conditions in the camp, etc. When he left, my dad just looked at my mom and I and said that Uncle John had never talked about any of that to him, ever. Some of us have bits and pieces of his story, but his story was never recorded and I think that is a shame. I do this to honor him.”

Overall, the project, which was conceived in 2004 by a teacher at Cactus Shadows High School, has published more than 1,500 veteran stories. Kofa’s students have contributed to that total. As of the 2018-19 school year Kofa is the only school in the Yuma area and one of only 28 schools in the United States involved in the project. 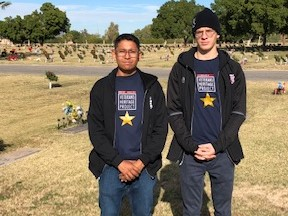 “Every veteran has a story to tell and each and every one of them deserve to be heard,” Foley said. “Most of them insist they did nothing important and do not want to seem like they have an inflated view of their service compared to their brothers who may not have returned.”

Foley, Carrasco and their students have carried out the project at Kofa after Thompson originally brought it to Foley’s attention in 2016.

“The VHP was brought to me 2016 by Retired Coast Guard Admiral Bob Sloncen,” Thompson said. “He is a friend and mentor as well as educator. When he shared the project with me, I immediately thought of Tammy Foley. She is a teacher at Kofa High School and I worked with her while Principal there. She has always been a great supporter of the men and women in military service, including many of her former students. I knew this project would take on a special place in her work.”

The Veterans Heritage Project connects students with veterans in their communities, offering students the opportunity to become immersed in one-on-one personal accounts of heroism and service to our Country, while learning life-long skills, developing a passion for history, writing and civics, and an appreciation of the freedoms which came through the sacrifices of those who have served our nation. The project is geared towards students in seventh through 12th grade with a mission to honor veterans, preserve America’s heritage, and develop future leaders.