Five members of the A-10C team, including maintenance technicians, crew chiefs, and others, shared details of their jobs with students, presented a video of the A-10C in action, and answered questions as part of a presentation that lasted over an hour.

“This presentation was amazing,” said Miguel Augustin, a freshman at Kofa who is a member of Civil Air Patrol as well as the school’s Marine Corps JROTC program. “I was amazed by what they taught us about the A10, and also how to get into the Air Force. There were a lot of points about how the Air Force can pay for our education so we can one day be a part of their team.” 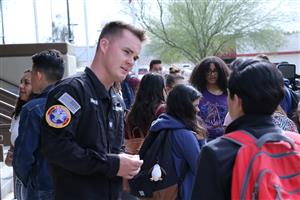 After the presentation, the team took a group photo with students and spent some additional time answering more in-depth questions, including providing background on the training that they underwent to reach their particular roles in the Air Force.

Tech Sgt. Hale Bradley complimented the numerous JROTC students about their commitment to getting a head start in the armed service. “It’s really cool that you are involved in something like this [JROTC],” Bradley told the group. “It’s going to open a lot of doors for you in the future.”

According to the Air Force’s official website, the A-10 is the Air Force's premier close air support aircraft, providing invaluable protection to troops on the ground. The Air Combat Command A-10C Thunderbolt II Demonstration Team, stationed out of Davis-Monthan Air Force Base, Arizona, brings the aircraft to air shows around the country to showcase the unique combat capabilities of the A-10 "Warthog." They perform precision aerial maneuvers while highlighting the mission and professionalism of the men and women of the U.S. Air Force. Additionally, the team brings attention to the Air Force's proud history by flying formations with historical aircraft in the Air Force Heritage Flight.

The team, along with Captain Copy Wilton, are taking part in the MCAS Yuma Airshow this weekend. Kofa’s JROTC color guard as well as the San Luis High School band are participating in the festivities as well.