The Emme’s are dedicated to preventing youth suicide and attempts by making suicide prevention accessible to everyone. The couple started the Yellow Ribbon project after their son, Mike, committed suicide in 1994. Since, they have been have traveled the country advocating awareness to people of all ages.

“We are here to talk about suicide prevention,” Dale Emme said. “But also to empower the kids, to be able to know how to help and that it’s OK to ask for help and to be able to be a link for their friends if they know of anybody that really does need help.”

Wednesday’s assemblies were proceeded by two days of training for approximately 60 middle school and high school students and staff members that included representatives of all school districts in Yuma County as well as others from Antelope, Somerton and Mohawk Valley. Yuma Regional Medical Center has worked closely with project.

“One of our physicians came to us, and he had experienced the loss of their student. He said, ‘You’ve got to do something about this,’” said Wayne Steffey, Executive Director of the Foundation of Yuma Regional Medical Center. “So, the foundation decided to be as active as we can, and this is the result from it.”

According to the American Foundation for Suicide Prevention, the rate of suicide in the United States has steadily climbed since 2006. As of 2015, teens and young adults, aged 15 to 24, make up about 12.5 percent of the nearly 45,000 deaths by suicide each year. However, according to the Center for Disease Control, suicide is the second leading cause of death for ages 10-24.

“We want them to be able to become suicide prevention advocates, to have a voice in a movement in the country about raising awareness for this circumstance and condition,” Dar Emme said. “It’s a life skill that’s never talked about. We learn CPR, but we never learn how to help somebody if they were really at that point in their life. So, it’s an educational piece about how they can help, how they can be educated at a very basic level.”

The committee’s goal is to bring similar Yellow Ribbon awareness assemblies to all YUHSD campuses.

“[I want students] to know that they have the ability to help,” Legros said. “They may not have a clinical background or a counselor’s background or anything of that nature, but they are the key to being able to prevent suicide and being able to just speak out the word ‘suicide’ is very, very important. They are the ones that will be able to teach their parents, their grandparents about how to talk about a topic that is very prevalent in today’s society.”

The Yellow Ribbon Project is dedicated to preventing youth suicide and attempts by making suicide prevention accessible to everyone and removing barriers to help. The program’s two keys are: empowering communities and individuals through leadership, awareness, and education, and by identifying/collaborating with support networks to save lives. For more information, visit yellowribbon.org. 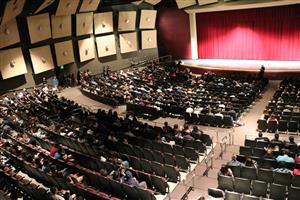