The San Luis High School marching band will ring in the turn of the new year “across the pond” in 2020-21.

On Tuesday, Nov. 12, 2019 the band and Director Martin Peralta were formally invited to march in London’s New Year’s Day Parade and Festival by British dignitaries Bob Bone and Johnathan Whaley in an on-campus ceremony that included a 10-minute performance from the band.

“We were all really excited,” SLHS band member Ana Estrada said when asked how the students reacted to learning about the invitation. “It’s the first time in high school we have gotten to travel as a band.”

The parade, which traverses the streets of London on January 1 each year, features more than 8,500 performers with a global television audience of more than 450 million. It has potential to be a life-changing week in the historic city as students immerse themselves in a full educational program visiting museums, historic sites and places of architectural and artistic interest.

San Luis will be one of 16 schools from the United States represented in the parade.

“The thing that makes [San Luis] stand out is that they get it,” said Mr. Bone, who is the co-founder and Executive Director of the parade. “They are all about entertaining. What we always say about our event is that it’s the greatest parade in the greatest city in the world, and if we see that the people performing are enjoying themselves then the people in the audience without a shadow of a doubt will enjoy themselves as well.”

In addition to his role with the parade, Mr. Bone is co-founder of the London International Choral Festival. He has been at the helm of both events in every year of their existence. In recognition of his work for London and its Boroughs, Mr. Bone was made an Honorary Member of the London Mayors’ Association in 2005 a distinction that has been bestowed on only five people in the 117-year history of the Association. 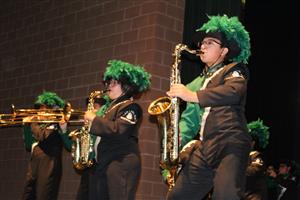